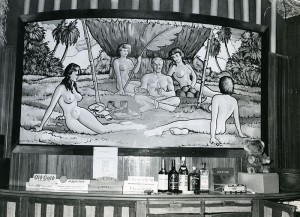 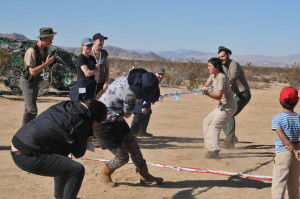 Our national security is vulnerable to natural and man-made disasters, and there are often limitations to what digital technology can accomplish to help remedy these situations or mitigate further damage. At Camp CARPA 2013, CARPA contractees are participating in a variety of challenges designed to generate groundbreaking research and development so that future first responders are equipped to handle hazardous conditions in a variety of disaster response operations.

On October 16, 2013 CARPA agents participated in a simulated disaster recovery. The camp was divided into two teams, one focused on Fiber and one on Technology. These teams were instructed to make the strongest rope possible with limited materials. They were given several cotton knit T-shirts, a few pairs of scissors, and sticks. Both teams cut up the T-shirts into long strips. 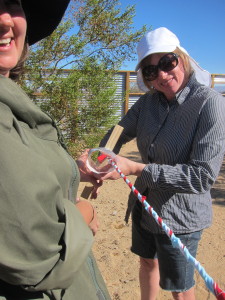 On team Fiber, 9 strips of cotton were plied together counter-clockwise into 3 ropes. Agent Christine Tarkowski then used the core of a water bottle (a common item of detritus that could be found on a flood plain or in earthquake rubble) as a stabilizer, while using a small stick to create leverage, to ply the 3 ropes clockwise. The rope was then doubled.

On team Technology, after some dissension among teammates, all strips were twisted together using a power drill with an eye bit attached. 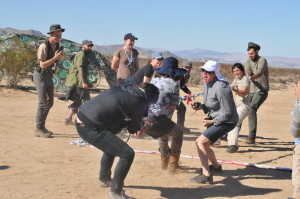 After both ropes were finished, they were joined in the middle and set over a dividing line in the sand. Teams Fiber and Technology both chose two champions to test the relative strength of their ropes in a tug-of-war. After an early lead by Team Technology, Team Fiber emerged victorious.